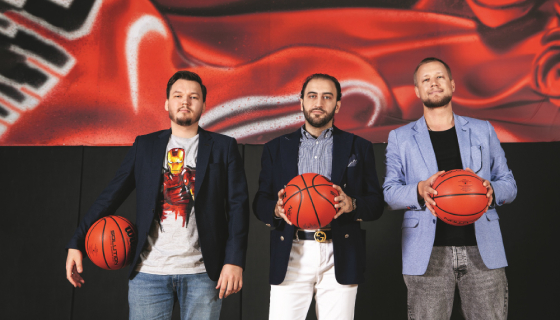 In the new basketball season, the strongest amateur teams in Moscow compete under the auspices of the United Basketball Association (UBA). Organized tournaments are attended by professional players under the age of 21 years. The creators of the association, Kirill Sadilov, Mikhail Gusev and Emin Antonyan, talk about the UBA's challenges and ambitious plans for “Big Sports” magazine.

By whom and for what purpose was the association created?

Kirill Sadilov (K. S.): I would say that it was created by people who are not indifferent to basketball, who are tired of waiting for something to begin to change in a positive direction in the development of this sport in our country in terms of its popularization and access to a new level in all areas: amateurs, professionals, children, three by three and so on.

Mikhail Gusev (M. G.): I think we were all guided by a simple idea: to create a league where clubs could participate with pleasure. Despite the apparent obviousness, the idea is not so simple to implement. Thet is where the experience of all the founders and members of UBA is so important.

Emin Antonyan (E. A.): We wanted to create a league where each club (at this stage of the championship) would have the opportunity to participate in the creation of the product. Because it is important for us that players and leaders of the clubs would have fun and really be proud that they are part of the league.

What benefits does League membership give to participants?

Among the advantages for the participants are the best Moscow Playground, the planned high level of organization of the league and mass media coverage. Broadcasts, SMM, work with clubs and spectators, launch of our mobile application - all of this we want to do in accordance with reference samples from professional sports and using the tools of a large business. It is important that it should be a beautiful story both internally and externally, understandable for everybody, including sponsors.

M. G.: We all invest a lot in UBA. And it’s not even about money, but about time, nerves, emotions. We now invest all of our combined experience in building successful business, creating a high-quality sports product, where we want to have fun, and give this opportunity to everybody: club leaders, players, spectators.

E. A.: There is an important thing: the number of teams in the league will be fixed. With a high percentage of probability, we will expand the number of participants to 10, in theory possible to 12. That's all. And when we manage to launch and maintain the planned level of quality, then the players themselves will want to play in the UBA participating clubs. And this will be a great value for the club leaders with slots in the league: everyone will want to play in their teams.

Plus, as Kirill and Mikhail have already said, we are building an excellent product where we invest a lot of ourselves, and where there are many opportunities for everyone involved. I think club leaders will see additional value in the chance to participate in the creation of such a new product for Russian amateur sports.

How is the league planning to develop?

K.S .: Plans are huge! For me personally, it is important, on the one hand, to make high-quality product in amateur basketball - an analogue of the Euroleague, but for top teams in Russia. On the other hand, on this product basis and through work with sponsors, we want to popularize all directions of basketball, starting from kids. In fact, to build some kind of model, as Germany had done with football at one time. When due to masses and competition, work from a very early childhood, the opening of a huge number of training fields and halls, really big professionals were on the top. We want to come to this. The main thing is that after everything there should be someone to choose from - for example, to the national team.

M. G.: We would like to organize top-level competitions, based and developing on all rules and options that we have in amateur basketball. That is our task for the first season - to create a product, about Kirill speaks. In the future, we should come to the neat and pinpoint scaling, while maintaining the quality and high level of organization of the league. The main conclusions on possible areas of development will be made after the first season.

What competitions, in addition to the Moscow championship, are planned to be held?

K. S .: Perhaps we can arrange at the end of the first season or in the second something like “Four teams from Moscow vs four teams from St. Petersburg”. Of course with a focus on the quality of basketball. I would also definitely like to organize competitions and a training program for children in the future, because for them it will be extremely useful in terms of creating competition and development.

Does the Russian Basketball Federation support your endeavors?

E. A.: We have excellent relations with the RBF. For example, Natalya Galkina, Executive Director and Secretary General of the RBF, took part in the draw of the first season, we are friends with both President Andrei Kirilenko and CEO Evgeny Ivanov. So this is a direction where I see great opportunities for joint projects.